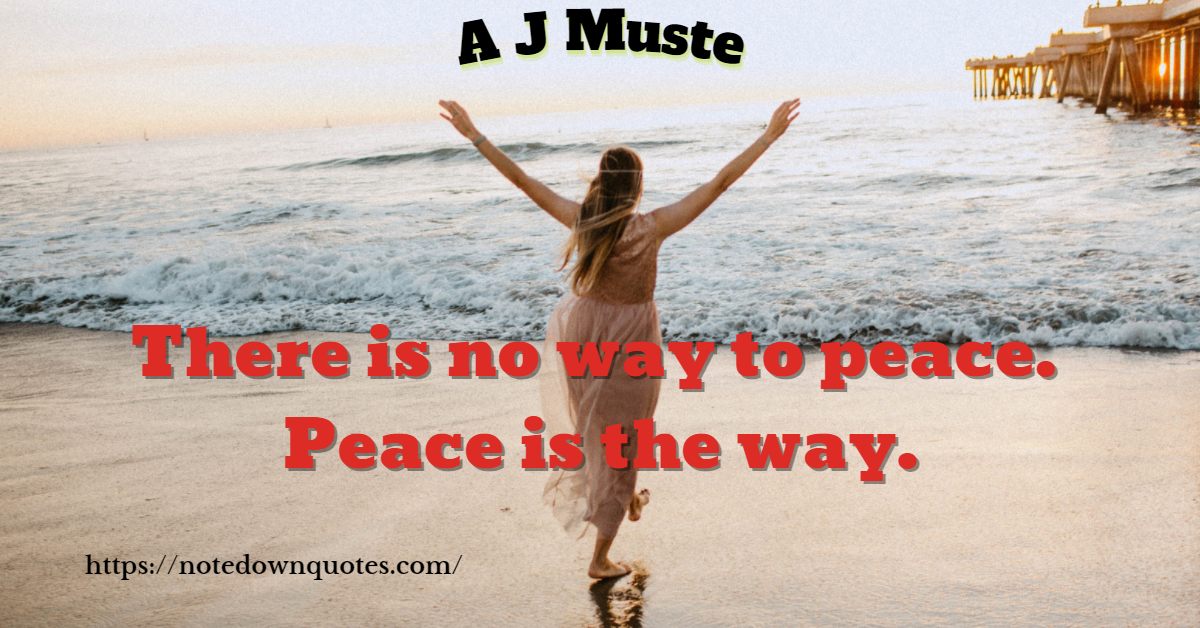 There is no way to peace. Peace is the way.

There is a certain indolence in us, a wish not to be disturbed, which tempts us to think that when things are quiet, all is well. Subconsciously, we tend to give the preference to ‘social peace,’ though it be only apparent, because our lives and possessions seem then secure. Actually, human beings acquiesce too easily in evil conditions; they rebel far too little and too seldom. There is nothing noble about acquiescence in a cramped life or mere submission to superior force.

The problem after a war is with the victor. He thinks he has just proved that war and violence pay. Who will now teach him a lesson?

The survival of democracy depends on the renunciation of violence and the development of nonviolent means to combat evil and advance the good.

We cannot have peace if we are only concerned with peace. War is not an accident. It is the logical outcome of a certain way of life. If we want to attack war, we have to attack that way of life.

In the defense of civil liberties there can be no exceptions, or there will soon be many.

In a world built on violence, one must be a revolutionary before one can be a pacifist.

War is not an accident. It is the logical outcome of a certain way of life.

Those who can bring themselves to renounce wealth, position and power accruing from a social system based on violence and putting a premium on acquisitiveness, and to identify themselves in some real fashion with the struggle of the masses toward the light, may help in a measure – more, doubtless, by life than by words – to devise a more excellent way, a technique of social progress less crude, brutal, costly and slow than mankind has yet evolved.

Joy and growth come from following our deepest impulses, however foolish they may seem to some, or dangerous, and even though the apparent outcome may be defeat.

Violence begets violence by whomever used. War is a dirty business and entails the use of degrading means, whoever wages it.

Paradoxically, life is worth living for those who have something for which they will gladly give up life.

Educational enterprises do not for any length of time remain immune from the struggle of interests for power which is the dominant feature of social life under a class system.