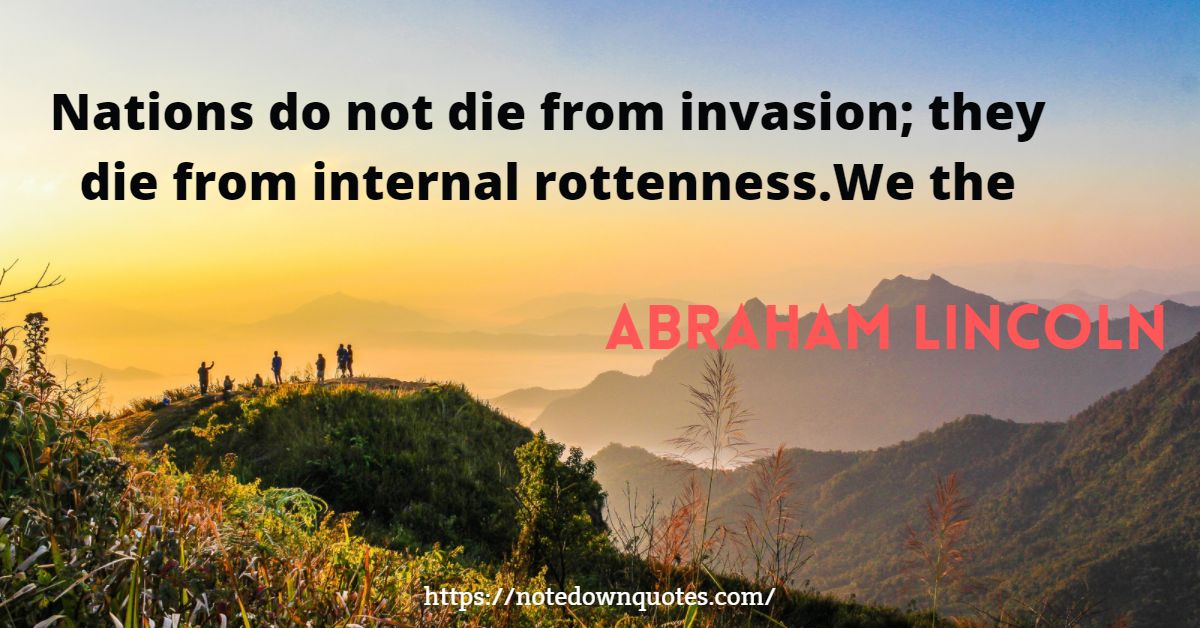 Nations do not die from invasion; they die from internal rottenness.We the

I see in the near future a crisis approaching that unnerves me and causes me to tremble for the safety of my country… corporations have been enthroned and an era of corruption in high places will follow, and the money power of the country will endeavor to prolong its reign by working upon the prejudices of the people until all wealth is aggregated in a few hands and the Republic is destroyed.

The most reliable way to predict the future is to create it.

Nearly all men can stand adversity, but if you want to test a man’s character, give him power.

You must remember that some things legally right are not morally right.

Sir, my concern is not whether God is on our side; my greatest concern is to be on God’s side, for God is always right.

Better to remain silent and be thought a fool than to speak out and remove all doubt.

We can complain because rose bushes have thorns, or rejoice because thorn bushes have roses.

You cannot help the poor by destroying the rich. You cannot lift the wage earner by pulling down the wage payer.

I am a firm believer in the people. If given the truth, they can be depended upon to meet any national crisis. The great point is to bring them the real facts.

It is a sin to be silent when it is your duty to protest.

You cannot build character and courage by taking away people’s initiative and independence. You cannot help people permanently by doing for them what they could and should do for themselves.

Behind the cloud the sun is still shining.

Those who are ready to sacrifice freedom for security ultimately will lose both.

If there is anything that links the human to the divine, it is the courage to stand by a principle when everybody else rejects it.

It often requires more courage to dare to do right than to fear to do wrong.

We have been preserved, these many years, in peace and prosperity. We have grown in numbers, wealth and power, as no other nation has ever grown. But we have forgotten God. We have forgotten the gracious hand which preserved us in peace, and multiplied and enriched and strengthened us; and we have vainly imagined, in the deceitfulness of our hearts, that all these blessings were produced by some superior wisdom and virtue of our own. Intoxicated with unbroken success, we have become too self sufficient to feel the necessity of redeeming and preserving Grace, too proud to pray to the God that made us!

Kindness is the only service that will stand the storm of life and not wash out.

Nothing is stronger than gentleness.

The best way to destroy an enemy is to make him a friend.

Give me six hours to chop down a tree and I will spend the first four sharpening the axe.

Faith is not believing that God can, but that God will.

Our republican system was meant for a homogeneous people. As long as blacks continue to live with the whites they constitute a threat to the national life. Family life may also collapse and the increase of mixed breed bastards may some day challenge the supremacy of the white man.

Two of my favorite things are sitting on my front porch smoking a pipe of sweet hemp, and playing my Hohner harmonica.

You cannot have the right to do what is wrong!

Teach the children so it will not be necessary to teach the adults.

Elections belong to the people. It’s their decision. If they decide to turn their back on the fire and burn their behinds, then they will just have to sit on their blisters.

You cannot fail unless you quit.

Commitment is what transforms a promise into reality.

In the end, it’s not the years in your life that count. It’s the life in your years.

To stand in silence when they should be protesting makes cowards of men.

I believe the Bible is the best gift God has ever given to man. All the good from The Savior of the world is communicated to us through this Book.

Any people anywhere, being inclined and having the power, have the right to rise up, and shake off the existing government, and form a new one that suits them better. This is a most valuable – a most sacred right – a right, which we hope and believe, is to liberate the world.

Those who deny freedom to others deserve it not for themselves.

Let the people know the truth and the country is safe.

I have always found that mercy bears richer fruits than strict justice.

You cannot escape the responsibility of tomorrow by evading it today.

Don’t interfere with anything in the Constitution. That must be maintained, for it is the only safeguard of our liberties.

Things may come to those who wait, but only the things left by those who hustle.