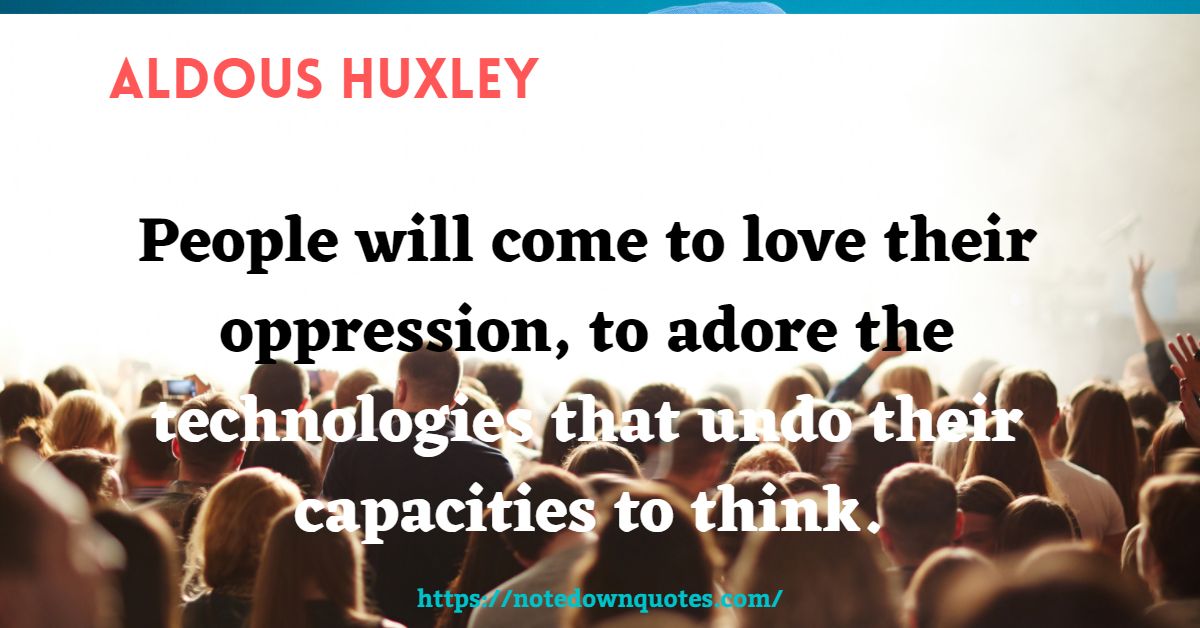 People will come to love their oppression, to adore the technologies that undo their capacities to think.

There will be, in the next generation or so, a pharmacological method of making people love their servitude, and producing dictatorship without tears, so to speak, producing a kind of painless concentration camp for entire societies, so that people will in fact have their liberties taken away from them, but will rather enjoy it.

The victim of mind-manipulation does not know that he is a victim. To him, the walls of his prison are invisible, and he believes himself to be free.

The deepest sin against the human mind is to believe things without evidence.

Never have so many been manipulated so much by so few.

Medical science has made such tremendous progress that there is hardly a healthy human left.

Facts do not cease to exist because they are ignored.

It’s dark because you are trying too hard. Lightly child, lightly. Learn to do everything lightly. Yes, feel lightly even though you’re feeling deeply. Just lightly let things happen and lightly cope with them. So throw away your baggage and go forward. There are quicksands all about you, sucking at your feet, trying to suck you down into fear and self-pity and despair. That’s why you must walk so lightly. Lightly my darling.

The real hopeless victims of mental illness are to be found among those who appear to be most normal. Many of them are normal because they are so well adjusted to our mode of existence, because their human voice has been silenced so early in their lives that they do not even struggle or suffer or develop symptoms as the neurotic does. They are normal not in what may be called the absolute sense of the word; they are normal only in relation to a profoundly abnormal society.

There is only one corner of the universe you can be certain of improving, and that’s your own self.

This Power Elite directly employs several millions of the country´s working force in its factories, offices and stores, controls many millions more by lending them the money to buy its products, and, through its ownership of the media of mass communication, influences the thoughts, the feelings and the actions of virtually everybody. To parody the words of W. Churchill, never have so many been manipulated so much by few.

People often ask me what is the most effective technique for transforming their life. It is a little embarrassing that after years and years of research and experimentation, I have to say that the best answer is – just be a little kinder.

Reality cannot be ignored except at a price; and the longer the ignorance is persisted in, the higher and more terrible becomes the price that must be paid.

Love casts out fear; but conversely fear casts out love. And not only love. Fear also casts out intelligence, casts out goodness, casts out all thought of beauty and truth.

The surest way to work up a crusade in favor of some good cause is to promise people they will have a chance of maltreating someone. To be able to destroy with good conscience, to be able to behave badly and call your bad behavior ‘righteous indignation’ — this is the height of psychological luxury, the most delicious of moral treats.

Beware of being too rational. In the country of the insane, the integrated man doesn’t become king. He gets lynched.

Dictators can always consolidate their tyranny by an appeal to patriotism.

Most ignorance is vincible ignorance. We don’t know because we don’t want to know.

The propagandist’s purpose is to make one set of people forget that certain other sets of people are human.

The most valuable of all education is the ability to make yourself do the thing you have to do, when it has to be done, whether you like it or not.

The secret of genius is to carry the spirit of the child into old age, which mean never losing your enthusiasm.

The question of the next generation will not be one of how to liberate the masses, but rather, how to make them love their servitude.

A really efficient totalitarian state would be one in which the all-powerful executive of political bosses and their army of managers control a population of slaves who do not have to be coerced, because they love their servitude.

Wherever the choice has had to be made between the man of reason and the madman, the world has unhesitatingly followed the madman.