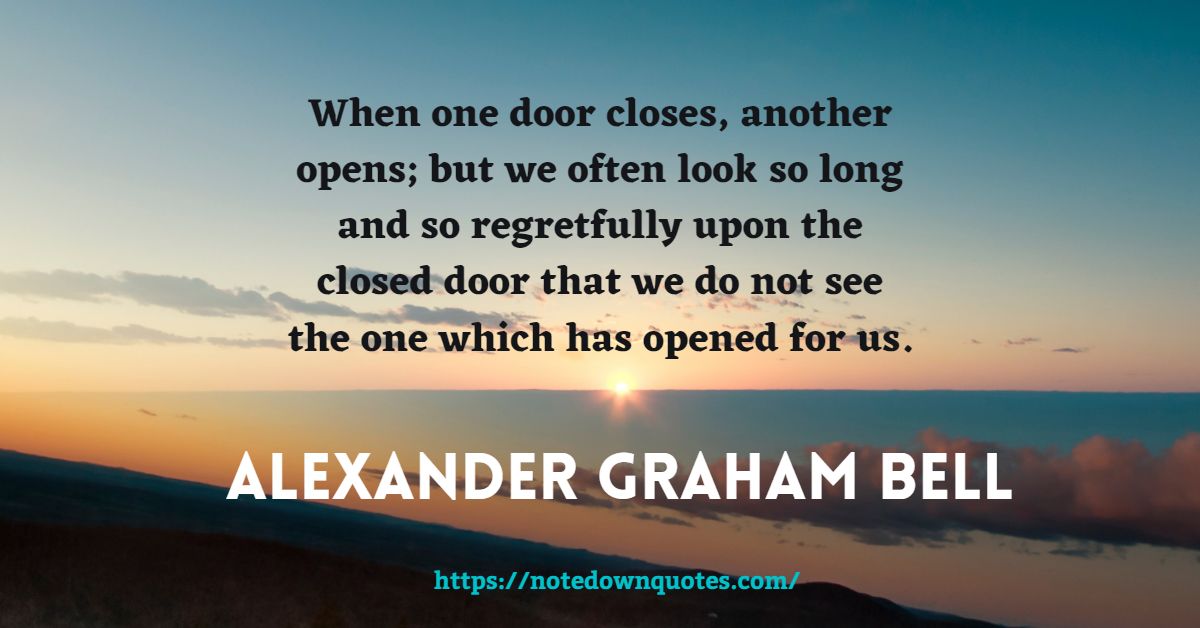 When one door closes, another opens; but we often look so long and so regretfully upon the closed door that we do not see the one which has opened for us.

The day will come when the man at the telephone will be able to see the distant person to whom he is speaking.

Before anything else, preparation is the key to success.

The only difference between success and failure is the ability to take action.

The achievement of one goal should be the starting point of another.

Don’t keep forever on the public road, going only where others have gone and following one after the other like a flock of sheep. Leave the beaten track occasionally and dive into the woods.

I have travelled around the globe. I have seen the Canadian and American Rockies, the Andes, the Alps and the Highlands of Scotland, but for simple beauty, Cape Breton outrivals them all!

Great discoveries and improvements invariably involve the cooperation of many minds.

Concentrate all your thoughts upon the work at hand. The sun’s rays do not burn until brought to a focus.

Sometimes we stare so long at a door that is closing that we see too late the one that is open.

You cannot force ideas. Successful ideas are the result of slow growth. Ideas do not reach perfection in a day, no matter how much study is put upon them.

A man, as a general rule, owes very little to what he is born with – a man is what he makes of himself.

One day every major city in America will have a telephone.

What this power is I cannot say; all I know is that it exists and it becomes available only when a man is in that state of mind in which he knows exactly what he wants and is fully determined not to quit until he finds it.

First words on the first telephone – “Mr. Watson – come here – I want to see you.”

Don’t keep forever on the public road, going only where others have gone. Leave the beaten track occasionally and dive into the woods. You will be certain to find something you have never seen before. Of course it will be a little thing, but do not ignore it. One discovery will lead to another, and before you know it, you will have something worth thinking about to occupy your mind, and really big discoveries are the result of thought.

The inventor is a man who looks around upon the world and is not contented with things as they are. He wants to improve whatever he sees, he wants to benefit the world; he is haunted by an idea. The spirit of invention possesses him, seeking materialization.

We are all too much inclined, I think, to walk through life with our eyes shut. There are things all round us and right at our very feet that we have never seen, because we have never really looked.

The great advantage [the telephone] possesses over every other form of electrical apparatus consists in the fact that it requires no skill to operate the instrument.

There are two critical points in every aerial flight-its beginning and its end.

When one door closes, another one opens.

The most successful men in the end are those whose success is the result of steady accretion.

It is the man who carefully advances step by step…who is bound to succeed in the greatest degree.